If the weekend has shown us anything about the Cubs and the Cardinals, it is the stark contrast in one talent between the two catchers: pitch framing.  Welington Castillo, while a much improved defensive player, is still deficient in this one critical area of the game.  Yadier Molina, on the other hand, has made making balls look like strikes an art form.

Funny thing about this topic, though.  Nowhere in the rule book does it state that a strike is where the catcher catches and/or holds the ball.  Actually, the rule book says,

The STRIKE ZONE is that area over home plate the upper limit of which is a horizontal line at the midpoint between the top of the shoulders and the top of the uniform pants, and the lower level is a line at the hollow beneath the kneecap. The Strike Zone shall be determined from the batter’s stance as the batter is prepared to swing at a pitched ball.

That strike zone, while arbitrarily determined, is what is in the rule book.  At the moment, each umpire has essentially decided to arbitrarily (and inconsistently, I might add) determine their own strike zone.  Basically, this is like allowing someone to call Chicago the capitol of Illinois because they say so, even though it has already been determined that Springfield is the capitol.  Umpires are employed to enforce the rules, not make their own set.  And this set is vital to the game.

Incorrect strike zones have far reaching effects on each day’s game and can have effects beyond just that one day.  In the case of Edwin Jackson today, his performance wasn’t as bad as his results because he was squeezed on some close calls.  Those calls ran up his pitch count, putting him over 50 in the first two innings.  While the game is in rain delay as this is being written, it is highly unlikely that Jackson works deep into the game (UPDATE: he actually lasted six innings and only gave up four runs all things considered, which is pretty phenomenal), requiring the use of additional relievers.  If the Cubs were not off tomorrow, it could (and still might) change the bullpen strategy altogether for the series in New York.  That doesn’t even get to the obvious effect of “a player should have been out and instead got another pitch” or “the difference in the count changes the pitcher’s approach, which very well could change the result of the at-bat” which is illustrated nicely, here…

While the umpires have actually been improving at calling balls and strikes based on the rule book zone, they still incorrectly call balls in the strike zone balls over 10% of the time. even worse, there are still cases like today’s Cubs @ Cardinals game, where you get stuff like this, illustrating nicely that strikes shall not be called above the waist: 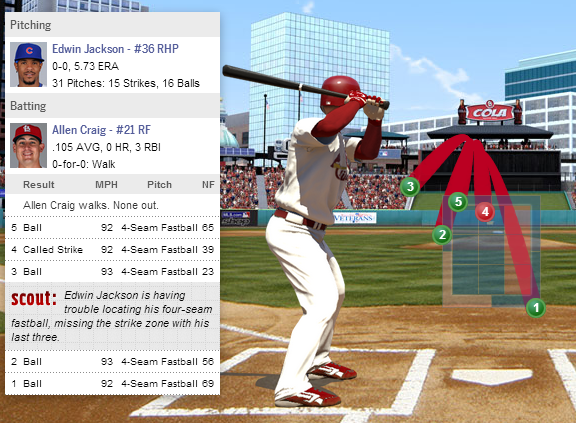 Fortunately, this image clearly illustrates both the problem AND the solution.  The technology already exists for balls and strikes to be called by a computer program.  MLB actually already has that technology (seen in the image from the Gameday application).  It doesn’t take much to add a person to each umpiring crew for each series to operate the program, either from a booth in the ballpark.  If that’s not desirable, it could feasibly be done from a central location, much like the replay system is currently done.

I know I am inviting scorn from some who think that this would irreparably change the game for the worse.  Here is why you’re wrong…

1.  Baseball has always had the “human element.”

Simply because you’ve been doing something wrong for over 100 years is no reason to continue to do it wrong.  The technology to do this has not always existed.  It does now.  Umpires are human beings.  And it is really tough to see where a 95 MPH pitch is exactly in relation to the strike zone when you have a small fraction of a second to do it.  Most importantly, valuing the human element is valuing incorrectness for the sake of having incorrectness.  We’ve already seen that incorrectness is undesirable with the institution of replay.

Duh.  That’s kind of the point.  The catcher is back there to catch the ball, apply tags on plays at the plate, or make a force out.  The catcher’s ability to frame pitches gives teams who have someone who is very good at it an advantage that is outside of the spirit of the rules.  In essence, Yadier Molina gives the Cardinals an unfair advantage because he is able to fool the umpire into thinking a pitch was in the zone when it actually wasn’t.  All rewarding ability to frame pitches does is place artificial value on an accepted form of cheating.

3.  It would impact scoring.

At first, probably, until hitters adjust. The flip side is a better pace of the game.  Most umpires currently do not call strikes above the belt, although there is still a good foot of written in the rules strike zone above it.  More strikes mean more outs which means faster games.  In addition, there would be a lot less #umpshow for managers and/or players arguing balls and strikes.  Less #umpshow is good for everyone.  So, while scoring would likely decrease in the near term, professional athletes have a remarkable ability to adjust AND less #umpshow.  Wins for everyone.

Then we go back to the old way until it gets fixed or until the next game.  We currently have a pretty decent back up option serving as a the primary option.

Ultimately, the discussion boils down to how much incorrectness fans, players, and teams are willing to deal with.  For the moment, we’re getting a solid B out of the umpires in the ability to call balls and strikes.  We actually have technology that could bring the accuracy of ball and strike calls closer to 100%, which is what we should be striving for.

Sometimes I write stuff about the Cubs. Sometimes it's even good. But don't get your hopes up. Basically, my writing is like the pre-2016 Chicago Cubs.
View all posts by Andy →